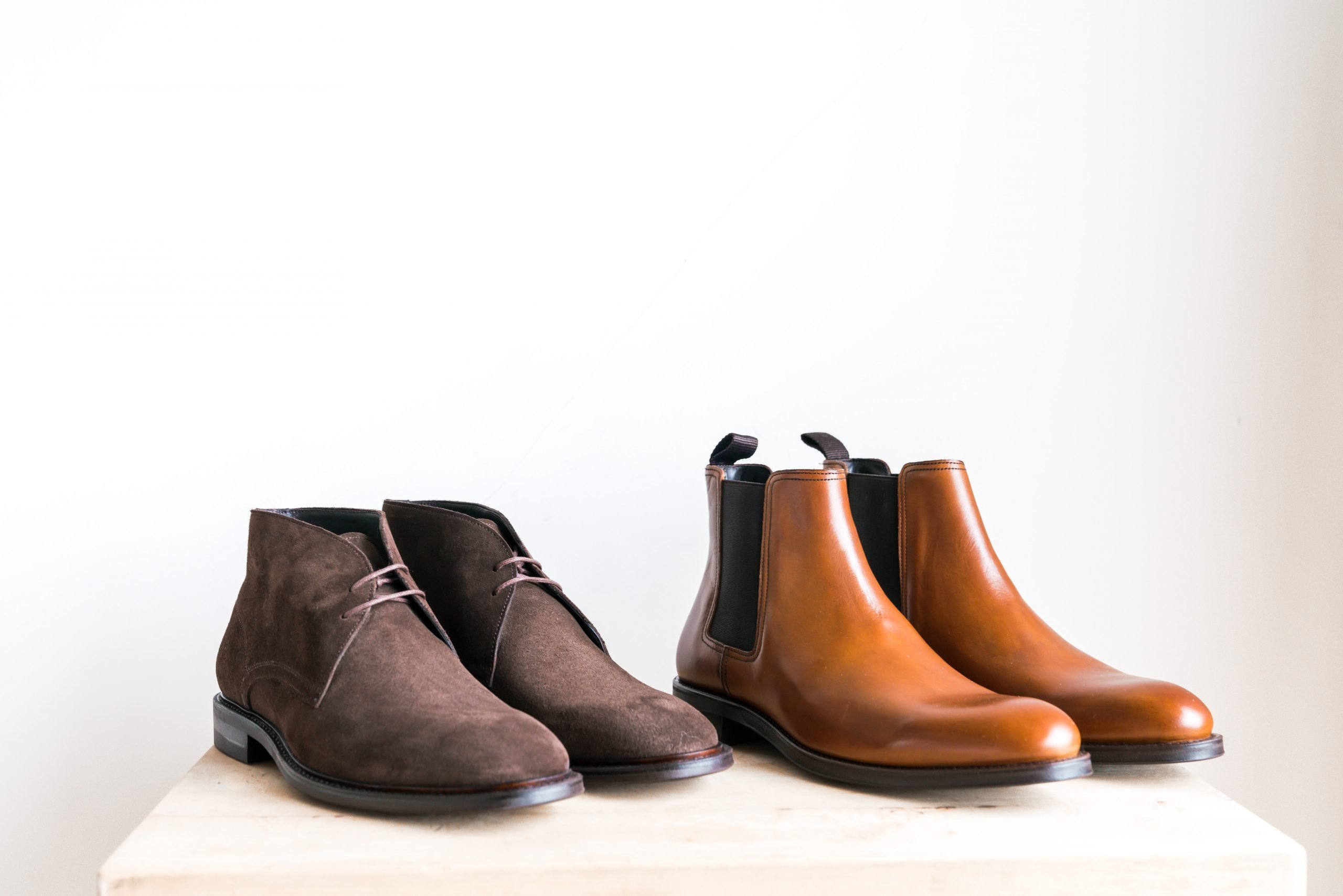 Can you tell your chukka from your chelsea? Want to know which 19th century influencer made it onto a patent application? Find out with our quick guide to men’s boots.

A unisex style, the Chelsea Boot is a pull-on ankle boot with side panels of elastic. Most will have a pull tab at the rear to help the wearer pull the boot on, although some styles may also have a tab at the front. Whilst the elastic gusset boot was popular from its invention through to the outbreak of the First World War, the name ‘Chelsea Boot’ came about when the boot became popular amongst the King’s Road Set during the Swinging Sixties.

The Chelsea Boot has existed since at least 1851. In an early example of influencer marketing, bootmaker J Sparkes-Hall claimed in his patent that “she walks in them daily and thus gives the strongest proof of the value she attaches to the invention”. ‘She’ was in fact the most famous, and most powerful, woman in the world at the time – Queen Victoria.

The Chukka Boot is a men’s style popularised in the aftermath of the Second World War. A Chukka is an ankle boot, with two or three eyelets, and open lacing. The origins and name of the Chukka Boot are up for debate. A chukka is a period of play in the equestrian sport of polo which was popular amongst officers of the British Raj.

The style became popular in the UK as soldiers returned from the North African Campaign. Nathan Clark, of the Clarks shoemaking family, was serving in Cairo when he saw imported South African veldskoen boots on sale in the souks. In the finest tradition of British business, Clark promptly sketched a drawing of the boots and sent the designs back home for his brother Bancroft to copy in the family factories.

The Chukka Boot remains a key piece of the fashionable gent’s wardrobe. With their simple design Chukka Boots come in many materials. Uppers may be from leather or suede, and the soles may be rubber, leather, Dainite or commando.

Whilst their open lacing and two or three eyelets give away their casual nature a pair of Chukka boots can still dress up an outfit compared to other casual footwear.

All hiking boots are lace-up, but not all lace-up boots are fit for hiking. A lace up boot usually comes up over the ankle providing greater support to the feet and lower leg.

The lace up boot dates back to prehistory and remains a formidable barrier to the elements. After all, if it ain’t broke, don’t fix it! Usually equipped with a rubber sole for grip and longevity, the lace-up boot tends to be sturdier than other styles of boot. Whilst not appropriate for office wear, the lace-up boot is perfect for walking and leisure.

This website uses cookies to improve your experience while you navigate through the website. Out of these cookies, the cookies that are categorized as necessary are stored on your browser as they are as essential for the working of basic functionalities of the website. We also use third-party cookies that help us analyze and understand how you use this website. These cookies will be stored in your browser only with your consent. You also have the option to opt-out of these cookies. But opting out of some of these cookies may have an effect on your browsing experience.
Necessary Always Enabled
Necessary cookies are absolutely essential for the website to function properly. This category only includes cookies that ensures basic functionalities and security features of the website. These cookies do not store any personal information.
Functional
Functional cookies help to perform certain functionalities like sharing the content of the website on social media platforms, collect feedbacks, and other third-party features.
Performance
Performance cookies are used to understand and analyze the key performance indexes of the website which helps in delivering a better user experience for the visitors.
Analytics
Analytical cookies are used to understand how visitors interact with the website. These cookies help provide information on metrics the number of visitors, bounce rate, traffic source, etc.
Advertisement
Advertisement cookies are used to provide visitors with relevant ads and marketing campaigns. These cookies track visitors across websites and collect information to provide customized ads.
Others
Other uncategorized cookies are those that are being analyzed and have not been classified into a category as yet.
SAVE & ACCEPT
Powered by